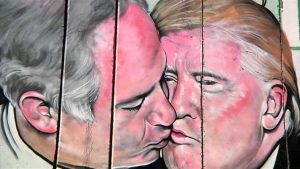 Facebook would soon collapse on Wall Street. This is the story behind its imminent fall

This is not fiction

I’ve exposed, detailed and documented beyond any reasonable doubt for the benefit of our law enforcement agencies what I’m certain is a massive and illegal election bribe between Facebook and Netanyahu which tilted the outcome of Israel’s April 2019 elections in Netanyahu’s favor. If not stopped the same bribe deal would also take its toll on our September 2019 elections.

Phi Beta Iota: The Trump campaign is spending more money on Facebook than all other candidates combined. From where we sit, the President is being too soft on Facebook (and Amazon, Google, MeetUp, Twitter, and YouTube) — not only should FAANG / #GoogleGestapo be under RICO investigation and a massive class action lawsuit for defamation, tortuous interference, and violations of privacy and first amendment and Title 7 rights, but a special court is needed that can hear grievances and impose billion dollar fines overnight. FAANG / #GoogleGestapo is out of control and the President may find that Facebook is milking him and with flip the switch a week before Election Day and screw the President over completely — after all, the President is a “shiksa” and shiksas don’t count, they can be screwed with impunity.