OPTION C: Zionists digging in for the final battle.

END_OF_DOCUMENT_TOKEN_TO_BE_REPLACED

Big Picture. Mike Bloomberg can buy the Democratic nomination — count on it. Mike Bloomberg can also win the general election. If Trump’s campaign does not embrace #UNRIG, a truth channel, and mount serious advances toward blacks, Latinos, women, young, and old as well as veterans, this could be a toss-up. Of course the President has enormous power to do good between now and Election Day. Jared Kushner remains a negative for the Presidency. If Durhan indictment emerge in the holiday period, an asset-backed currency and bottom-up economic stimulus, and perhaps a student debt jubilee are announced as “Christmas presents,” the President will close 2019 with bang. Otherwise expect little to happen until 15 January when everything starts moving again. Election is Trump’s to lose, says BET Bob Johnson. Some believe that Deep State might crash the economy to bring Trump down but on balance he’s a sure thing for re-election.

END_OF_DOCUMENT_TOKEN_TO_BE_REPLACED

Big Picture. Bloomberg-Gabbard changes everything. Dems and Trumpers are in denial. What is not clear is what combination of populists and third party leaders will carry the day. Some believe Bloomberg will save Biden, we disagree. Others do not believe Bloomberg can make it outside of NYC (or even within NYC) and that America is not ready for a Jew as President, we disagree. #UNRIG remains an ace — whether Trump or Bloomberg, whoever embraces #UNRIG will achieve an immediate bump across all eligible voters who do not vote (50%) and the 20% of the voters who do vote and also hate the two-party tyranny. It IS clear is that American wants the “Norman Rockwell” version reinstated. Trump Junior booed by supporters of his father — a weak signal of future weakness? Trump will be tried in the Senate, but not convicted. Nikki Haley playing for VP in 2020, President in 2024 — wrong answer. Demo donors and Dem base now officially frantic “Elizabeth Warren will just not do.” Obama cries for a fake to the center.
END_OF_DOCUMENT_TOKEN_TO_BE_REPLACED 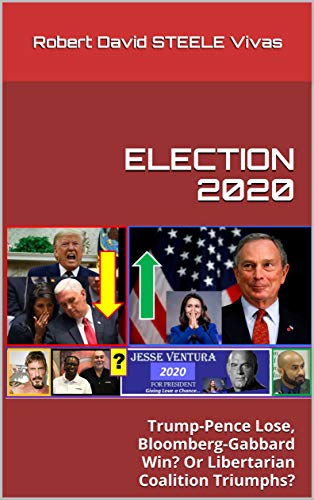 This 129 page volume started out as a simple publication of two assessments of the 2020 prospects of President Donald Trump against any moderate Democratic challenger. It quickly evolved as “primer” on the civil war that is going on today between the Deep State and its extremists on the one hand, and those of us who want to restore family and faith as a central aspect of “the American way.”

Here is the Table of Contents: